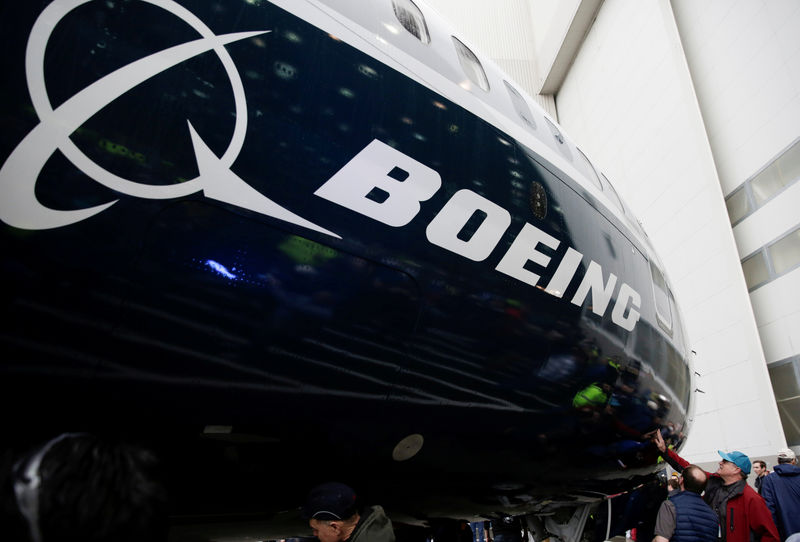 (Reuters) – Boeing (NYSE:BA) Co raised its profit and cash flow expectations for 2019 on Wednesday, sending shares up more than six percent amid a boom in air travel and speedier 737 production.

Chicago-based Boeing said it expects to deliver between 895 and 905 commercial aircraft in 2019, up from 806 aircraft it delivered last year, which – although just below company targets – kept it ahead of rival Airbus SE for a seventh year.

Investors closely watch the number of planes Boeing turns over to airlines and leasing firms in a year for hints on the company’s cash flow and revenue.

Despite its rosy outlook, America’s biggest exporter faces possible turbulence on a number of fronts in 2019, including financial stress felt by some of its airline customers, signs of a broader economic slowdown and U.S. trade tensions with China, where Boeing ships about 1 out of 4 aircraft that it makes.

There are also unanswered questions related to the deadly crash of a Lion Air 737 MAX in Indonesia in October that thrust a spotlight on the newest version of the best-selling jet, as well as on airline training and maintenance.

Boeing Chief Executive Dennis Muilenburg told analysts on a conference he expected relatively light commercial airplane deliveries early in 2019, and said the company had not reached a “decision point” on its proposed new midsized jet.

Boeing has started running 787 Dreamliner assembly lines at a rate ready to support higher output of 14 jets a month, bringing it within reach of a closely-watched goal designed to boost cash and reduce costs, Boeing Chief Executive Dennis Muilenburg said on a conference call with analysts, confirming an earlier Reuters report.

The 787 transition to 14 per month will be completed by the second quarter.

Boeing said its quarterly operating margin on commercial aircraft increased to 15.6 percent from 11.6 percent from a year ago, driven by higher 737 production and higher margins on its high-tech 787 Dreamliner widebody.

CEO Muilenburg said the company had not yet reached a “decision point” on whether to move forward with an midsized jet, known as NMA, aimed at a niche market falling between narrow- and wide-body aircraft.

The decision on whether to launch the new jet, which Boeing said it would make in 2019, is expected to reshape competition with Airbus which dominates the top end of the medium-haul sector.

The company forecast operating cash flow between $17 billion and $17.5 billion in 2019, compared with cash flow of $15.32 billion in 2018, and above analysts’ average estimate of $16.73 billion, according to IBES data from Refinitiv.

Those numbers indicate Boeing has largely surmounted delays getting fuselages and engines for its best-selling 737 narrowbody which snarled production over the past year. Even so, related production logjams dragged down quarterly free cash flow to $2.45 billion, below the previous year.

Boeing’s core earnings rose to $5.48 per share in the fourth quarter, from $5.07 per share a year earlier, and came in above Wall Street’s estimate of $4.57 per share.